Reps in Reserve (RIR) is an extremely powerful tool to optimise your training.

Like with anything powerful, having the skill and wisdom to use it effectively is critical to success.

Unfortunately, despite the potential benefits of RIR, research shows most people are not equipped to use it.

Reps in reserve is a resistance training specific variation of rate of perceived exertion (RPE). RPE is a scale used to determine how hard someone thinks physical activity is. RPE is measured on the Borg scale which runs from 6 to 20. 20 being absolute maximal exertion.

Generally, RPE is used in cardio type exercise. The Borg scale was adapted to a gym based weight lifting setting on a 1-10 scale which basically made it so that anything above a warm-up was 6+ out of 10 (see image below).

This scale is useful, but has been made more ‘weight training specific’ by being adapted further to become a specific measure of reps in reserve. This is more intuitive for the lifter and most useful for those concerned with muscle mass gains. At the end of a set you simply record how many more reps you could do and that gives you your RIR (see image below). 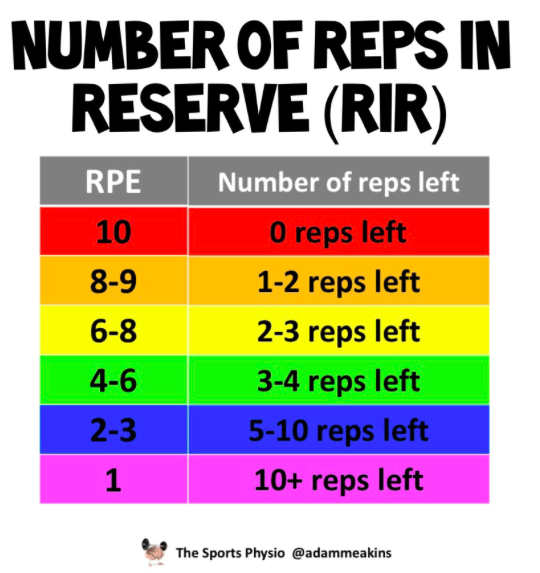 Given there is a large amount of evidence indicating that training relatively close to failure is needed for muscle gain but, going all the way to failure is not, the RIR is a useful tool to ensure you are working at a sufficient relative intensity to build muscle.

It seems relatively advanced lifters can build muscle anywhere between zero and 5 reps in reserve. So, basing your training around sets that are within this range is a good idea. Being skilled enough to progress your RIR over time unlocks the potential for more specific muscle building training and longer-term success.

Why Not Always Go to Failure?

Going to failure can be used as a muscle building strategy. However, performing every set to failure is probably not ideal. It increases your risk of injury. Furthermore, training to failure increases fatigue disproportionately to the added benefit. It can also reduce overall training volume which could, in time, actually limit size gains.

Going to failure is a variable that can be manipulated to maximise long-term gains. Advanced lifters need to take a lot more care in how they plan their training. Gains are harder to come by when you are closer to your genetic ceiling. I’d suggest periodising your training volume and frequency, adjusting rep ranges, and changing exercises over time to maximise gains. I would also suggest adjusting how close you go to failure.

Proximity to failure is another useful tool in your muscle building toolbox. Don’t abuse it!

Manipulating RIR over the course of a block of training is a smart move to maximise your results. I have written a whole article on RIR progression schemes here.

However, to get the benefit of RIR you must be skilled at it.

This is the BIG problem. Many people would benefit from RIR, but are unable to as they lack the skill.

A recent study analysed how well lifters could estimate their RIR by asking them how many more reps they can do and then letting them go to failure to see how many they actually got.

The researchers found that lifters were better at estimating their RIR for bench press than leg press.

They also found the participants were less accurate the further from failure they were. So, it seems they had a good idea what 2-3 RIR feels like, but were not so good at estimating things at 5RIR or above. Most participants underestimated how many reps they had left in the tank when 3-4 reps from failure.

Give your ability to build muscle is largely reliant on your capacity push sets to at least within 5 reps of failure these findings show a lot of people don’t have skill required to use RIR.

The studies also found a trend that more experienced lifters were better at estimating RIR. This supports the fact that RIR is a skill built over time.

Another study found that regular gym goers were wildly inaccurate at estimating their 10-rep max weight. Most of them self-selected what they thought was a 10-rep max and actually managed to do more than 15 reps. On that basis, many of them would barely get within the 5RIR threshold that is promoted for building muscle.

Note.Training at 5+RIR does not mean you will build zero muscle but, it probably does severely restrict your gains.

…if you have the skill to use it.