One of the most common questions I get asked about training is, how many reps should I do to build muscle? The short answer is…

…do most of sets with a weight you come close to failure on in the 6-12 reps range.

Simple! You will build plenty of size if you simply select weights that fatigue you and push you close to failure in this rep range. You will not, however, build the most muscle possible by restricting yourself to this rep range. That is where the long answer comes in.

In fact, a recent study concluded that…

“If one’s goal is simply to maximise overall muscle mass, exercise prescriptions should include training across a wide spectrum of repetition ranges.”

The 6-12 rep range is probably the most efficient way to maximise volume from a practical perspective. The weights lifted fall in the “sweet spot” where they are quite heavy but, you can perform multiple sets and reps with them without fatigue becoming overwhelming. Doing enough sets to create a lot of volume with very heavy or light weights can be extremely demanding and often impractical.

For example, hitting the same volume using a 3-rep max load requires lots more sets. This extends the duration of training sessions significantly. All those extra rest intervals mean that it can take twice as long to get the same volume of work done.

Lighter loads have a practical issue which prevents them from being ideal at accumulating a high volume of work. Taking sets of 20-30 reps to failure can be extremely fatiguing and very uncomfortable. The sense of nausea that a 30-rep set to failure creates is not fun! So, persuading yourself to do another set is quite some task.

Hitting multiple sets of 6-12, however, is not easy, but it is easier than doing the same overall workload at either extreme of the spectrum.

So, we know that sets of 6-12 is effective and efficient, but to maximise your size it makes sense to at least spend some of your time outside this rep bracket. One of the reasons for this is muscle fibre type.

There are three main types of fibre types:

Type 1 are your “slow” twitch fibres. These produce less force but, are more fatigue resistant.  On the other end of the spectrum are Type 2B. These produce high levels of force but, fatigue quickly. Type 2A are kind of in the middle. They can produce more force than type 1, but not as much as type 2B. They are somewhat fatigue resistant and have better endurance than type 2B, but not as much as type 1.

Note. Although an accepted classification the three fibre types model is a gross simplification. In actual, fact muscle fibres exist on a spectrum rather than a distinct three type model. Last time I checked I believe that there were at least 57 variations in muscle fibre type ranging from slow to fast extremes. What is more, muscles are not made up of purely one type of fibre. They have a ratio of different fibres within the muscle as a whole.

To capitalise on this fact and maximise your size it is probably wise to try to target your rep ranges specifically towards the functional capacity of a muscle. On that subject, more research on muscle fibre type is coming out of the labs. The following table gives you some basic guidelines: 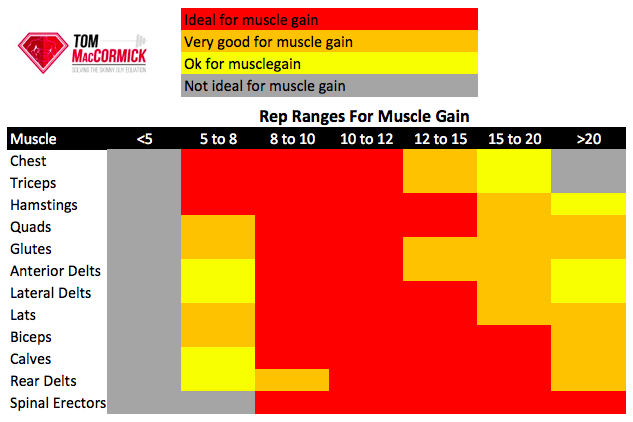 The concept of matching your repetitions to the specific muscles involved has gathered some pace recently with more research investigating the topic. It seems that type 1 fibres do contribute significantly towards the overall size of a muscle. In fact, one of the reasons bodybuilders are so huge is that they have trained and developed their type 1 fibres. Research also suggests that lighter weights taken to failure are effective at training type 1 fibres. It is actually believed that sets like this actually preferentially enhances muscle gain in these fibres.

To stimulate your type 2A and 2B fibres, heavier loads are required. Thus, doing most of your work in the 6-12 rep range, but with some training done above and below this range appears the smartest strategy when it comes to building muscle.

You do not have to train all these rep ranges within a single session, or even training week. Instead you can periodise your training to target different rep ranges within different phases of training. One simple method I often use with clients to achieve this is a reverse linear progression scheme. Simply put, this involves them using heavier weights for fewer reps and then, across a few phases of training transitioning to lighter loads and higher reps.

The use of the word mostly in the above example is important. You do not have to be restricted to these rep ranges for the entirety of a phase of training. You might do a few sets of 15 reps in phase 1. Likewise performing one compound exercise for sets of 6-8 in phase 3 can occur. However, the bulk of a phase is biased towards the rep ranges listed above.

This makes sense from the perspective of training all fibres to some extent but also from a practical perspective. Certain exercises do not suit certain rep ranges very well. For example, a set of 20+ deadlifts are more likely to end in injury than muscle gain. Likewise, a 1-rep max biceps curl is more likely to strain your biceps than build them.

For guidance on what rep ranges to choose for specific exercises read this article I wrote on the subject.

As a practical guide to repetitions for maximum muscle size, I often give my clients the following guideline: 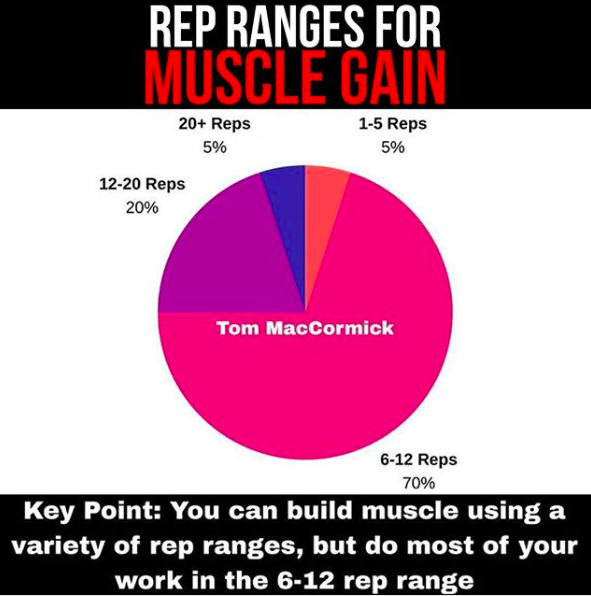 Would you like me to write your training program for you? Simply email tom@tommaccormick.com with the subject heading “Program Design” and I’ll be in touch about designing a plan for you.